The Politics of Nice

Because I’m a good Canadian, I try to be nice. But sometimes things just hit a fever pitch and I have to dump. So I’m going to ruin your day.

Monsanto, Bayers and friends are preparing to register over 1600 new plant patents for North American food plants. And not just the plants themselves – they want to patent the characteristics of the plant – drought resistance, for instance. Seed companies have already successfully sued NGO seed banks for competing against them, so guess what will happen when all these plants have patents on them?  And now that they are successfully ridding Europe’s shelves of those oh-so-unregistered alternate medicines, they are turning their eyes back to North America for that as well. For our safety. And I was just told, now that people are turning to organic and ethically raised meat animals, that abattoirs in BC will no longer be accepting pasture raised pigs. They have to be raised indoors. And small BC pork producers are being paid to stop raising pigs.  Leave it to the big guys. That leaves only factory farms. And I have been told that back east, even sheep are on the list for factory farming – must be indoors. And chickens – laws are in the air to keep them, even our small flocks, inside as well. For our health. Of course, on the big farms these animals will now all need medicating – 70% of our antibiotics go into our meat animals … and then into our water systems. But that’s okay – the pharmaceutical industry is working on something to fight the superbug.

Now, I could be freaking about this, and I should be. But I realize I live in what is termed a democracy, and the masses will win. On hearing the above, the common person will sigh and lift their shoulders and go back to buying their Maple Leaf bacon and factoried chicken. And I realize it is not the large corporations I am fighting, it is the nice Canadian, the broken American, who will not fight their way free of this.

A man on Vancouver Island wants to challenge the Constitution in terms of the existing meat laws that restrict our freedom to consume preferred farm food. But he can’t get help. No one is sending money; affected farmers cannot even raise the energy to send in affidavits to support his case. Communities are not rising up. He needs support right now. Our tiny group, the Farm Food Freedom Fighters, has three active members. And I’m pooped. I feel too tired even to explain to the few people who might respond to this what this man needs in the way of help, because I will doubt they will follow through and my time will be still more empty air.

I need a job. My pipes are frozen. The car needs work.  I’m burnt out. That will leave two Freedom Fighters. Everyone else is “busy”. We are “too busy”.

We live in interesting times. We get the world we deserve. We don’t know how to fight. But there is still a lot of fun to be had out there. I think I will go have fun.

That will leave two.

But I’ve depressed you. That’s not very nice. So let’s try this. Let’s imagine we live in a giant cycle, and that this is a part of a cycle of power. And it will end. We don’t know when, but it will.

There. I feel nice again.

Get a free chapter from Robin’s book Food Security for the Faint of Heart!  ‘I’m Too Busy Watching Survivor to Live Through a Food Crisis’ is yours when you sign up for Robin’s ezine, where she shares her years of knowledge via email, twice a month.  Rural living tips, food security projects, musings on the politics of food – you’ll get it all, and you’ll learn something every time. 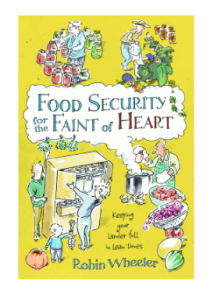